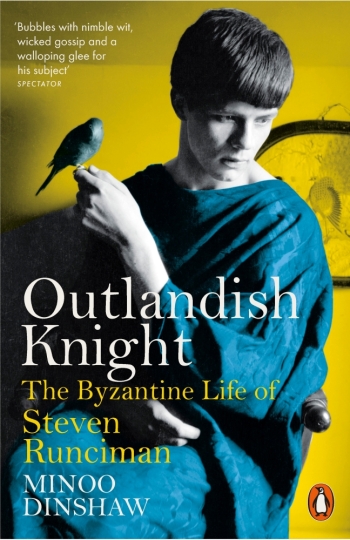 Being a series of short reviews of the Young Writer of the Year Award shortlisted titles. Spoilers ahead.

The title for Minoo Dinshaw’s enormous (700-page) biography of Steven Runciman, a noted Byzantine historian of the mid-twentieth century, comes from a Scottish ballad. There is no parallel between the events of the ballad (which comes in many variants but usually involves a woman running off with a knight who reveals himself to be a serial murderer; the woman defeats him through a combination of wit, strength, and sometimes magic) and Runciman’s own life, but Dinshaw admits that he chose it more for what it says about his subject’s taste. Born in Northumberland, Runciman would evince a deep love for and identification with Scotland and the Borders for the rest of his life, and would eventually, through a complicated series of events, become Laird of Eigg. (He went so far as to proclaim himself Scottish, although neither of his parents were.)

Dinshaw’s work is, to put it mildly, comprehensive. He has obviously been through every scrap of the relevant primary sources, including Runciman’s own unpublished memoirs, and his regard for his subject shines through every sentence. In a way, though, this is the book’s downfall. It is, as has been previously mentioned, very long, and although Runciman certainly came into contact with a wide array of interesting people (Eric Blair, Cecil Beaton, Freya Stark, the last Emperor of China, and the Queen Mother, to name but a few), the relevance of his own life is less clear. Dinshaw apparently described Runciman as a “courtly, old-fashioned queer” at the bloggers’ event that the other members of the shadow panel attended; to me, that sentence sums up the difficulty with Outlandish Knight in general, which is that it delineates a society—English, genteel, snobbish, mid-twentieth-century—whose rules are so alien now as to appear almost science fictional. (I told the shadow panel that it’s the same uncanny-valley feeling one often gets when reading Golden Age detective stories; although they mostly avoid explicit sexism and racism, the mores of the characters and the limits of acceptable social behaviour generally seem much more distant and exotic than, say, Dickens or Sterne.)

Dinshaw succeeds most at convincing us of Runciman’s importance, I think, when he emphasises that sense of distance by focusing on the ways in which his subject’s death heralded the end of a whole world. Runciman’s academic interest was in Byzantium, the Eastern and later segment of the Roman Empire, and in late antiquity shading into the medieval period in what is now Eastern Europe and the Middle East. The twentieth century changed these parts of the world drastically, irrevocably, and usually not for the better; one feels it a mercy that Runciman’s death occurred before September 11, 2001, and before he could see what became of the historic homes of the civilisations he had loved. In this sense, Outlandish Knight is a valuable, if melancholy, resource for understanding precisely what has been lost—in terms of approaches to scholarship as well as the business of living—for good and for ill. (Runciman’s sexuality is the one thing he appears never to have discussed with anyone, though his friends seemed aware that he had affairs. It strikes me as a life much like the character Posner’s in Alan Bennett’s The History Boys, who says at the end of the play that he’s “not happy, but I’m not unhappy about it.”)

Still, though. Despite the accolades that adorn the front cover, the writing seemed to me to be perfectly fine, but not outstanding. It is a lot more impressive when you realise that Dinshaw is only twenty-eight now and it took him four years to write, but even that provokes me mainly to be impressed with his self-confidence, not necessarily with an undying prose style. I came away from the biography with very little sense of what Steven Runciman might actually have been like: what might have made him laugh, or light up with interest; how he might have gone about making friends or flirting or tackling his work day. For a book this long, that’s a bit alarming.

The Young Writer of the Year Award winner is announced on 7 December. For more commentary, see the rest of the Shadow Panel: Rebecca, Clare, Dane and Annabel. Outlandish Knight is published by Allen Lane, and is now available in paperback so you don’t have to murder your wrists.