The week opened with two historical novels, one written some time ago, one being released next month. Towers in the Mist by Elizabeth Goudge is one of her adult novels; she wrote other books, for children, including Linnets and Valerians and The Little White Horse, both of which I loved as a kid. Towers in the Mist is set in Elizabethan Oxford and follows (more or less) a poor but very promising scholar called Faithful Crocker, who gets himself to Oxford in the hope of acquiring learning. He’s quickly adopted by the family of Canon Leigh of Christ Church, and becomes the servitor of the eldest Leigh son, Giles, also studying at Christ Church. Over the course of a year, the fortunes of Faithful and the Leighs rise and fall. There is a love story (there are two, actually), but two things really make the book: its stunningly vivid, detailed, loving descriptions of Oxford city and the surrounding countryside, and its funny, chatty, interesting asides about the real-life historical figures that people its pages. (The book features not only a young Walter Raleigh but a clever, thoughtful Philip Sidney, and Elizabeth I, amongst many other characters whose lives are a matter of record.) Goudge, of course, propagates a mid-twentieth-century view of Tudor England, one that holds up Good Queen Bess and the return of religious moderatism and Raleigh’s patriotic imperial yearnings as models of behaviour. But her characters are vivacious and irresistible, and the whole book comprises a love letter to Oxford that is more charming than I can say. She also handles religion rather well, I think; the practice and accoutrements of Christianity—prayers, relics and so on—are omnipresent in her characters’ lives in a way that feels entirely faithful to the period, probably because they were very present in her own life, too. 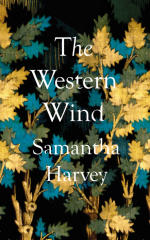 The second historical novel I read was distinctly harder to get a handle on, which feels, in its own way, appropriate: Samantha Harvey’s The Western Wind is set a hundred and fifty years before Towers in the Mist, and the boisterous wonder of the Renaissance has not yet settled on England. Nor are we in such an exalted locale as Oxford. Instead, Harvey puts us down in Oakham, a small and isolated village in Somerset (travellers who get lost in the area tend to end up in Wales). Oakham is dying: it has a river, but lacks a bridge, and therefore a port or wharf, and therefore trade. The local lord, Townshend, is under the deluded belief that cheese will make Oakham’s fortune, though there is no market for the products (anyone with a cow can make cheese, so why pay your neighbours for it?) Townshend has been losing his land, slowly but steadily, to Thomas Newman—an incomer to the area, but, we’re given to understand, a good man. As the book opens, Newman has drowned in the river, and the village priest, John Reve, is under pressure from the rural dean to find his killer.

The Western Wind is complicated in a way that Towers in the Mist is not. Those allegorical names, for instance: Townshend (town’s end), Newman (…come on), Reve (reeve; an archaic position in local government that involved law enforcement duties). Then there’s Reve himself, a man curiously slow to offer the things a priest must offer in fifteenth-century England, pre-eminently earthly judgment. Reve is passive, and not especially convinced of the sinfulness of his flock, and—relatedly—not especially convinced of his fitness to serve as their channel to God, though he never quite admits his doubts to himself. Then there is the sub-theme about technology and development; about building a bridge, and the money it’ll take to do it; about stewarding your land, and what that involves; about stewarding a people, and how ill-equipped those designated as leaders can be. It’s a very slow-rolling book, like a river after a flood but before the waters have gone back down, with a lot of unobvious things churning about in its depths. The more I think about it, the happier I’d be to see it on the Women’s Prize longlist.

There was then a fiction hiatus while I finished The Digital Critic, which I am meant to be reviewing for Litro. I will be pretty brief about it here (although Litro nicely says I can reproduce whatever I write for them on my own site). The book is a collection of essays—more or less; some are adapted versions of talks given elsewhere, like a Will Self lecture delivered at Brunel University—on the topic of the subtitle: literary culture online. A wide selection of subthemes is represented, from literary translators’ use of the Internet (in an essay that foregrounds the online journal Asymptote and discusses how its editorial team works to place translation further to the front of readers’ brains), to working “for exposure” in the age of moribund print media, to a writer’s need for isolation and how that works when social media demands constant accessibility. My favourite, from a standpoint of professional usefulness, is an essay on publishers and how they function as the very first “critics” of a text, in the sense that the choices they make about a book—editorial but also, very significantly, in terms of marketing and cover design—create a foundational interpretation of that book that every other reader and critic builds on. Of particular interest to bloggers are the several essays in the collection interested in the collapsing distinctions between “professional” or “elite” critics, and the criticism of the general public on forums like Goodreads, Amazon, and, of course, sites like this one. I would have appreciated an acknowledgement that the ability to participate in “professional” literary culture is in large part reliant on your ability to pay your rent whether there’s money coming in regularly or not, and that, therefore, the rise of “amateur” online literary critics might be a) representative of the fact that this is an increasingly difficult proposition, and b) a potentially fertile source of brilliant criticism that comes from people who happen not to be able to afford to play the game. Still, this is a collection of essays that I would like every bookseller, book blogger, book reviewer, arts page editor, and minister for the arts to read: containing such varied points of view, with consistently solid writing and argumentation, it’s illuminating at every turn.

Finally, to Women by Chloe Caldwell, out on the 8th of March from 4th Estate. 4th Estate tends to be incredibly trustworthy, and I have to say that this short novel—a novella, really—is written with the same linguistic surefootedness and attention to emotional detail that one expects from an author published by the same house that published Reservoir 13. Our unnamed narrator is a woman in her mid- to late twenties who moves to an unnamed city (probably LA or SF; it’s West Coast and big) and falls in love, quite unprecedentedly in her experience, with a woman. Finn is nineteen years older than our narrator, a virtually even mix of butch and femme, and has a long-term girlfriend. Despite that, the two women embark on an affair that leaves them both hollowed out. Caldwell evokes the childishness of bad decision-making, emotional manipulation, and jealousy with almost disturbing ease, and her descriptions of being lonely and unmoored by a solid friendship group or regular work hours will prompt nods of recognition too. My main issue with Women is probably signposted by the presence of that Lena Dunham quotation on the front: it feels very much like a tourist-lesbian novel in a way that codifies structures of privilege without examining them particularly hard. One reviewer on Goodreads writes that she feels uncomfortable with the narrator, a white woman, acquiring self-knowledge by way of Finn, a woman of colour. I didn’t pick up on any details that actually confirmed Finn’s non-whiteness to me, but then I wasn’t keeping an eye out for them; and anyway, it seems sufficiently worrisome that the focus of the novel is on a woman who doesn’t seem to self-identify as a lesbian at all, acquiring self-knowledge by way of a woman who has always identified as a lesbian and who has a very great deal to lose by their relationship. That doesn’t necessarily make Women a worse book, but it does, once again, raise the question of responsible storytelling, and where the line falls between representation and exploitation.

Thoughts on this week’s reading: A heavy historical and religious focus followed by a quite alarming slump: after Wednesday, I found it really difficult to get excited about reading anything. Overstimulation is probably the issue. Everything seems too loud, too bright, too exhausting.