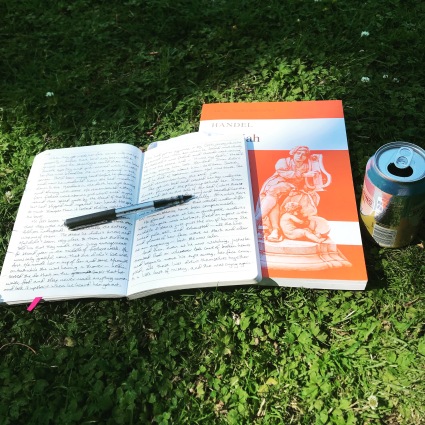 With thanks to Paula of Book Jotter for hosting—new participants always welcome!

Reading: I’m halfway through 20 Books of Summer, which is satisfying, and nearly caught up on reviews too. I’ve also started a singing gig at a church in west London, though, so I’ve actually been reading a lot of music. It’s a quartet or a solo every other week—they don’t have the budget for more, and I’m pretty happy having at least half my Sundays free while earning gin money the other half. Learning repertoire has always been one of my favourite things to do; last week the director of music introduced me to two Haydn duets from The Creation, which is a generally ridiculous piece (it was first written in English, then translated into German, then retranslated into English from the German, so the text is even more affected than your usual Georgian oratorio), but the duets are lovely. Here‘s one (ends at 3:45), and here‘s the other (ends at 3:09).

Looking: We finally bought a TV license. I resent having to buy a TV license when we don’t actually own a television, and I particularly resent having to pay the full year’s amount when we’re only making the purchase in June. On the upside, I suppose, this means we can watch the World Cup (which we’re not), and, um, reruns of Planet Earth or whatever. What’s good on the BBC these days? Netflix is more of my go-to at the moment; I’ve finally caught all the way up with Drag Race, have been amusing myself with the shonky-ness of Nailed It, and am under strict instructions to start watching Queer Eye, like, yesterday.

Thinking: Everyone else in Britain is freaking out about Brexit, and you know, I get it, but right now I’m way more worried about Justice Kennedy’s announcement that he’s retiring from the Supreme Court. Any Trump nominee will be anti-choice, and that shifts the balance of voting power on the Court; although, as my mother points out, Chief Justice Roberts surprised everyone with his vote on the Affordable Care Act, I still think it’s wise to prepare for a near future (let’s say eighteen months) in which safe, legal abortion is inaccessible in probably half of the American states. I know that at least one woman in my family received an illegal abortion, before Roe v. Wade passed, and it is beyond gutting to realise that, in two generations, we’ll have come full circle. I actually don’t have the words for this one.