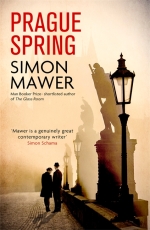 Simon Mawer is known as a writer of rather excellent spy novels, many of which are interconnected: The Girl Who Fell From the Sky, The Glass Room and Tightrope all have overlapping characters, and deal primarily with WWII espionage. (I reviewed Tightrope for Quadrapheme when it was released, and was impressed with Mawer’s ability to construct a female spy whose sex didn’t define her, and whose war trauma was acknowledged without being fetishised.) His new novel, Prague Spring, is set during a time that rarely gets treated, at least in the espionage fiction that I see: 1968, in Czechoslovakia, as the titular conflict draws near. Mawer has two sets of protagonists. The first is a pair of English undergraduates named James and Ellie, who are hitch-hiking around Europe and who head to Czechoslovakia more or less on a whim. The second is a British diplomatic official in Prague, Sam Wareham, and a young Czech student, Lenka, with whom he is conducting an affair. These four come into contact with each other about halfway through the book, and one of Mawer’s greatest successes is in showing how insistently social life asserts itself, even as huge political rumblings occur in the background: gigs and meetings and parties don’t stop even as Leonid Brezhnev continues to pressure Alexander Dubček. The espionage element of the plot exists, but is downplayed in favour of exploring political innocence and coming of age. Ellie is a passionate student protester (she was arrested in Paris, which gives her a mystique in James’s eyes), but events in Prague quickly overwhelm her limited and privileged experience of political conflict. The Czechs, meanwhile, experience this disillusionment on a grander scale, as Soviet forces invade the country and crush hopes for a more liberal society. Prague Spring is a much-needed examination of the human cost of repressive regimes, and also a rattling good read.

The Golden Age of crime writing is having quite the renaissance at the moment; I presume much of this is down to a desperate desire for escapism on the part of politically left-leaning readers, and a certain level of satisfaction for right-leaning ones in the allure of a simpler, jollier, more British age. Rachel Rhys’s second novel written under that name (it’s the pseudonym of psychological thriller writer Tammy Cohen), Fatal Inheritance, is set just post-WWII and takes place primarily on the French Riviera, where frustrated housewife Eve Forrester finds herself sitting in a solicitor’s office being informed that the last will and testament of Guy Lester, a man she’s never met, has named her as the beneficiary of a quarter share of his beachside villa. Needless to say, Lester’s adult children and wife are furious, but Eve wants to discover the nature of her connection to them, so, despite a barrage of irritated telegrams from her cold and boring husband, Clifford, she remains in France. As she attempts to investigate, it becomes increasingly clear that someone is trying to murder her – and that this might have some connection to a file of old newspaper clippings about a man killed in a London park decades earlier. Fatal Inheritance wears its influences unabashedly on its sleeve (I noticed some Mary Stewart, some Du Maurier, some Christie), although it’s not as original or as engaging as any of them: Eve is sympathetic but a bit of a blank, and the ultimate explanation feels a bit anticlimactic. Still, it’s a sunny summer book that practically reads itself. If it’s your sort of thing, it’ll definitely be your sort of thing, if you see what I mean.

I love advice columns. I love the whole concept of them, the placing of your confusion and entanglement into the hands of a kind, sensible stranger who can step back, look at what they’re holding, and tell you the shape of it. Cheryl Strayed’s column Dear Sugar, published at The Rumpus a few years back, is one of the undisputed classics of the genre. I’ve read Tiny Beautiful Things, a collection of some of those columns, before, but I come back to it every few years because Strayed takes people so seriously that it makes me want to cry. She makes their interactions a two-way street: not just some lost soul asking for help, but a conversation in which Strayed shares moments of vulnerability, or of epiphany, in her own life. It helps that she writes with lyrical grace that never falls into the trap of being self-satisfied, and it helps that she has had, by anyone’s standards, a life both tough as hell and outstandingly lucky. She knows whereof she speaks. I used to have a mug that said “Write like a motherfucker” on it, which is a quote from a Dear Sugar column (and to be honest with you, I want that mug back; I’ll buy another someday soon). But my favourite letter is from a man whose son was killed by a drunk driver several years ago, and who is struggling mightily to carry on. It’s a long letter, and the response is long too, but the final three sentences make me weep every time I read them – whether I’m in public or not, whether I’m feeling particularly sad that day or not. I think you, whoever you are, owe it to yourself to get hold of a copy of this book somehow and read them too.*

*Okay, okay: there’s a link to that column online here. Read it, and then buy the book. 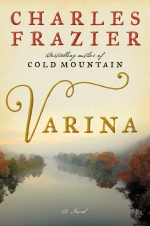 Varina is a historical novel about Varina Davis (née Howell), who married Jefferson Davis, the man who was later appointed President of the Confederate States of America. It’s a hell of a task, as a fiction writer, to humanise people whose ideas and ideals are so obviously, now, wrongheaded. The point on which Charles Frazier is to be commended is that he opens his arms to the complexity of this task. Jefferson Davis is here not portrayed as an evil man, but nor are his flaws brushed over: he’s ambitious, somewhat cold, and has a self-martyring streak. Varina is very clever, pretty, combative, and lonely. Her story is told in flashbacks, through conversations with a black man named James who was raised with her children – not as a slave or servant, but as part of her family – during the years of the Civil War. Varina’s and James’s relationship is complicated (did she really pick him up off the streets of Richmond, or is he her child? Is he Jeff’s?) and their conversations involve elusiveness, and illusion, on Varina’s part. All James wants is the truth about his past; Varina either can’t give it to him entirely, or can’t psychologically lose whatever she would need to lose in order to do that. She is a mystery to the reader much of the time, but Frazier is a gifted writer of character and so the result is not a cipher (like Eve Forrester of Fatal Inheritance, see above) but a woman who is enigmatic because she wants to be; not because there’s nothing there, but because there’s too much there. The musings on the rightness or wrongness of slavery that such a book must contain are integrated in a way that feels psychologically convincing. Varina recognises from the age of five that there is something odd about having masters and slaves – not necessarily good or bad, to her mind, but strange. Her observations of Jeff’s relationship to his longtime body slave and friend, Pemberton, acknowledge that strangeness too. Varina, as a novel, is thus both responsible and artful. We can talk about this in fiction, and the job of doing so can be taken up fruitfully by white writers as well as writers of colour, if we can be honest both to the characters and to the history. We must.

Thoughts on last week’s reading: Two new releases, an older title, and a proof of a forthcoming book: that’s a pretty good balance. To have enjoyed three out of four is also not bad, though it’s sad that I didn’t love the only author here that’s new to me.

12 thoughts on “Reading Diary: from Wednesday to Wednesday”