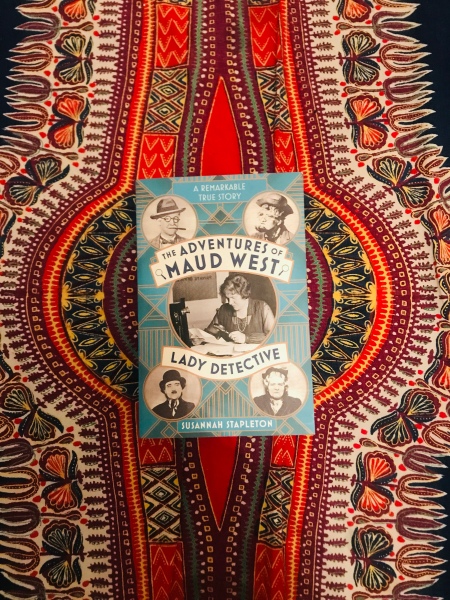 This rather marvelous book is a mashup of biography, social history, and what for a lack of a better phrase I might call “research thriller”. Susannah Stapleton comes across the figure of Maud West by chance, while idly pondering whether lady detectives had existed during the Golden Age of crime fiction; she’s only thinking about this at all because of a historical missing-persons case that regular historical research had led her to. When she finds Maud West, her interest is piqued by the dearth of information. “The game”, as she winningly puts it, “was afoot.”

Maud West did exist, although she wasn’t born under that name. She opened a private investigation agency in London in 1905 and ran it until just before the Second World War, employing a small staff of hand-selected and rigorously trained men and women as well as undertaking large amounts of field work herself. She wrote “case study” pieces for a variety of tabloids, and filled them with tales of derring-do, often involving white slavers, cocaine smugglers, last-minute ocean liner voyages, and fisticuffs (or, just as often, the well-timed production of a small revolver). Stapleton concludes that West mostly made these stories up–but why? Her business flourished; she tracked cheating spouses, fraudulent salesmen, dishonest cardsharps and country-house jewel thieves. In other advertising venues, she made much of her work amongst the “best sort”; the aristocracy and upper middle classes, in other words. West’s psychology–what she felt she had to prove; the characters she enjoyed playing; her love of disguise (this is borne out by many, many contemporary news features including photographs of West disguised as an old woman, a businessman, a vicar, and so on)–fascinates Stapleton, and the more she digs, the clearer it becomes that the life of this particular private investigator was at least as interesting as any of the cases she worked over the course of her career. Amongst other revelations, and without wishing to spoil anything, West’s life story includes a name change, illegitimacy, and someone who spends forty years masquerading as his own uncle.

Stapleton structures her book brilliantly: excerpts from sensationalist articles written by West are reprinted between chapters. Each chapter is named for a classic crime novel and deals (roughly) with some relevant social issue of the time, like the introduction of women to the Metropolitan police force or the “nightclub panic” of the interwar years, spliced with details of Stapleton’s sleuthing. Quite apart from being an excellent introduction to the Golden Age of crime outside of the pages of fiction, The Adventures of Maud West also functions as a window into the life of a working researcher. Stapleton takes trains from her home in Shropshire to the British Library to read archival clippings; she tracks down out-of-print books to get a sense of how West might have trained herself in investigation techniques; she scans international print databases and calls up descendants. The thrill of the academic chase is a huge part of the book’s appeal–which is really saying something, given that its subject is a woman with such immense willpower, fortitude, and peculiarity of character. A more engaging and intellectually stimulating biography you won’t read this summer.

The Adventures of Maud West, Lady Detective was published by Picador on 13 June.

If you like what I write, why not buy me a coffee?

9 thoughts on “04. The Adventures of Maud West, Lady Detective, by Susannah Stapleton”