Ohio, by Stephen Markley: This. Is fucking brilliant. The best post-9/11 novel I’ve ever read: detailed, lyrical, raw, all those book review words. Four high school friends reconverge in their hometown, one night in the early 2010s. They don’t all meet, but that night illuminates the history they share and the path their country has taken since. The Iraq war, Alanis Morrisette, OxyContin, summers at the lake, your boyfriend’s truck, baby lesbians, post-industrial hellscapes, Obama’s election, white supremacists, memorial tattoos, homecoming dances, football games, small-town rumors, the mystery at the centre of existence – Ohio has them all, and all wrapped up in beautiful, headstrong, confident prose. Get it. Read it.

Supper Club, by Lara Williams: As excellent as I expected from the author of the short story “Treats”, which smacked me around the face when I read it in Best British Short Stories of 2017. I sort of thought this might be predictable (wild women, eating as resistance, awkward sexual interactions, all that stuff that’s rolling around the societal forebrain at the moment), but Williams’s antisocial anti-heroine is painted in shades of grey: sometimes she’s selfish, sometimes genuinely self-protective; sometimes she really is pushing boundaries, other times hiding behind them. It’s a smart piece of work. 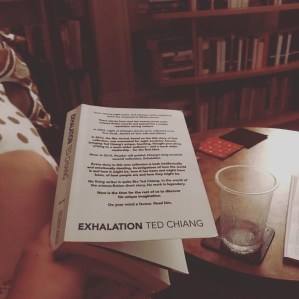 Exhalation, by Ted Chiang: A really outstanding collection of science fictional short stories from a master of the form, which you might not have been able to determine from the way I talked about this book on social media, which went as follows: “Reading Ted Chiang’s exceptional new collection and at the bottom of my 2nd G&T whilst wearing my least modest nightie, thanks, how’s your Friday night?” Anyway, he’s smart and rigorous as hell and his translucent prose serves as the foundation for explorations of how humans might think and live very differently. “The Lifecycle of Software Objects”, in particular, is going to be a really important story, which you should read.

A Lost Lady, by Willa Cather: I love, love, love Willa Cather, but I haven’t read any of her work for over a decade, and this was the perfect book to get reacquainted with her (thanks, Second Shelf!) It’s very short but a devastating, nuanced portrait of a woman whose hidden depths we (through the medium of Niel, an infatuated neighbour boy and then a young man) are always aware of but never manage to plumb. What struck me about Cather’s writing for the first time here was how clear and daring she is: about sexuality, about age gaps in relationships, about deep generosity and married love and how our truest selves can be failures as well as triumphs. She reminds me of Elizabeth Gaskell in that way: never vulgar, but often radical. Amazing.

You’ve probably already worked that out, but just in case: I went to Michigan for a week, didn’t think about book recommendations or blogging once, and felt so refreshed that I’m extending it. Check my Twitter feed (or indeed Instagram) for very short posts about books that I physically can’t stop myself from shouting about. Other than that, I’ll be commenting sporadically on all of your brilliant work, and I’ll be back when I feel less knackered.