A better gender balance this month, and less unswervingly miserable! I’ve been much more thoughtful about choosing what I want to read and when, paying attention to my moods and trying not to overwhelm myself with one genre or tone. I’ve been terrible at reviewing, though, again. This is a shame, because it’s not like I don’t have tons of ideas about these books; I just convince myself I haven’t got the time to do them justice. I should just write some stuff, instead, and see what happens.

most unabashedly comforting: Without a doubt, the month’s first selection, Winifred Watson’s 1930s novel Miss Pettigrew Lives For A Day. I desperately needed something that wasn’t crazy violent/dark/misogynistic/sorrowful/bittersweet, since almost everything that I read in August was at least one of those things. Miss Pettigrew was a perfect solution. The story of a poor spinster who finally blossoms when her temp agency accidentally gives her an assignment with a flighty nightclub singer named Delysia LaFosse, it’s got enough wit and sauce not to be blandly boring (there’s cocaine and premarital sex!), but nothing is actually, you know, upsetting, and everything ends well. There are also some really affecting, poignant pieces of interior dialogue, as Miss Pettigrew talks herself into enjoying life for once. I loved it.

most unexpectedly profound: “Unexpectedly” is a bit of a fudge here, because you can expect sly profundity in anything Terry Pratchett ever wrote. Nonetheless, Going Postal, which features an ex-con man glorying in the birth name of Moist von Lipwig being made to take over the running of the Ankh Morpork Post Office, pushes quite a few buttons, and pushes them with hilarity and wit. As always, the existence of golems—creatures to whom words are supremely important, because without them they wouldn’t function, although it’s also by words that they’re enslaved—threw up a good deal of moral conundrum, as did the revelation that the battle to be waged isn’t between old ways and new tech, but between giving a shit about people and giving a shit about money. It’s not as dark as some of the late City Watch books, but it’s seriously fun.

The other book that fits this description from this month is Bernardine Evaristo’s novel Mr Loverman, about an eighty-four-year-old Anglo-Caribbean grandfather who decides to finally come out as gay, ending his hopeless, loveless marriage of fifty years. Evaristo is a novelist I’d heard of, but never read, and this novel won one of the Jerwood Fiction Uncovered Prizes in 2014. It’s full of humour, and Barry, her protagonist, is certainly no victim; his attitudes are decidedly un-PC and he’s as judgmental as they come. Yet he’s also sympathetic, as we discover what gets sacrificed when you spend your whole life living an untruth. There’s a gravitas to this book that’s belied by its transparent prose; you can read it in a day, but it certainly won’t leave you for a while longer.

most disturbing: Penelope Mortimer (wife of John Mortimer, who gave the world the Rumpole novels) wrote a semi-autobiographical book called The Pumpkin Eater, about the breakdown of a marriage. Her protagonist, Mrs Armitage (we never learn her first name), is married four times by the age of thirty and mother of an ever-growing brood of children. The subtexts of infidelity, control, power dynamics and obsession made me think of it as a cross between James Salter’s Light Years and Ellen Perkins Gilman’s The Yellow Wallpaper. Certainly the most singular fictional woman I’ve encountered for some time.

most thoroughly engrossing world: Neal Stephenson’s Cryptonomicon hooked me without mercy. From a submarine in the North Atlantic to the jungles of Luzon to the Quonset huts of Bletchley Park, not once in over nine hundred pages do you feel as though you’re not fully immersed in everything that’s going on. A dazzlingly intelligent book by a writer who can really, really write (and who is often laugh-out-loud-in-the-queue-for-the-bus funny, which is the true litmus test of literary hilarity.) I plan to read the entirety of his backlist, an honour heretofore reserved in my mind for AS Byatt and Sarah Hall only. 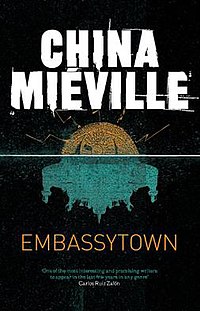 most thought-provoking: China Miéville’s novel Embassytown, about an alien populace, the two-mouthed Ariekei, whose language—or Language—has no referents. There is no way to lie in Language; words don’t represent things, they are the things. From this premise, Miéville spins a world and a plot that follow the implications of that worldview all the way to their conclusions. There are human similes, people who have acted out certain tableaux for the Ariekei in order to enable them to talk about something; there are cloned Ambassadors born and bred to speak Language (it can only be done with two mouths and one consciousness). There is addiction, war, and semiotics. It is one of the most intellectually complex novels I’ve ever read, and Miéville carries it off with very little apparent effort.

oldest friend: Bill Bryson’s majestically funny A Walk In the Woods, a travelogue about attempting to hike the Appalachian Trail with his alcoholic hometown buddy Stephen Katz. It’s partly set in the area I’m from (the Blue Ridge Mountains), and I’ve read it so many times that I know all the jokes, but that’s part of the joy. It’s recently been made into a film, which could be either wonderful or not so.

most topical: After having a guided tour through Mary King’s Close, a sunken medieval alley in Edinburgh, I read Mortal Causes by Ian Rankin, one of his famous detective novels starring DI John Rebus and the city of Edinburgh. Set in the early 1990s, some of the discussions about Scots-Irish religious sectarianism were convoluted and left me rather wishing for an executive summary of some kind, but it was exciting that the murder in the novel takes place in Mary King’s Close and that many of the locations Rankin name-checks were places I had been.

up next: I have about a thousand books which I have promised I will formally review, starting with Kerry Hadley-Pryce’s The Black Country, which I’m halfway through: a poisonous little gem of a novel about a marriage gone badly wrong. I also managed to leave Scotland having acquired six new books, so those are going to have to fit in somewhere…

I read six books in March–only half as many as last month–but this was partly because of a heavy work schedule, and partly because I read several long books that took a lot of time but will stay in my head for even longer. Here are this month’s Superlatives: as previously advertised, like your high school “most likely to succeed” categories, but less shit.

all around best: Joint honors go to The Wolf Border by Sarah Hall and The Light Years by Elizabeth Jane Howard. Hall’s novel is a thoughtful, beautiful, fiercely intelligent exploration of generation, family ties and the connections between humans and the environment we live in. She is the sophisticated, sexy writer I wish I could be. Elizabeth Jane Howard’s novel is a peerless evocation of pre-WWII England, told through the life stories of a large and typically idiosyncratic upper-middle-class family. Links above are to my reviews of both.

creepiest: Acceptance by Jeff VanderMeer, the conclusion to his Southern Reach trilogy. Better than the second if not quite as good as the first, Acceptance is about learning to die, or learning to change (isn’t it much the same?), as the biologist and Control unravel the secrets of Area X. The three need to be read together, but I thought Acceptance a satisfying ending, despite the many coyly unanswered questions.

most oddly anticlimactic: I like this category so much that I’m resurrecting it from February’s Superlatives post. This month, it was Laline Paull’s The Bees which left me cold and bewildered. Why are people so keen on this book? The writing is no more than competent, the structure is chaotic, the plot is guessable from the early pages. It’s not terrible, but why it’s on the Baileys long list and The Wolf Border isn’t is one of those things I’ll never, ever understand, like people who vote Republican.

most due a renaissance a la John Williams’s Stoner: Without a doubt, Simone Schwarz-Bart’s The Bridge of Beyond. Since it’s published by NYRB, the original publishers of Stoner, it seems possible that such a renaissance could happen again. Schwarz-Bart’s dreamy prose swaddles the story of a Guadeloupean woman and her struggles in life and love. It’s a gorgeous book, and offers no easy platitudes.

most intense: In every way, David van Reybrouck’s doorstop volume Congo: the Epic History of a People. The story he tells, from remote beginnings to Leopold’s annexation of the territory as his personal property to formal colonization by the state of Belgium, through to the granting of independence, the assassinations and incompetence that followed as a consequence of being woefully underprepared, and the culpable negligence of the US, EU and UN in coping with Congolese problems, are all covered in novelistic prose. Some of van Reybrouck’s assertions are, according to my uncle, who works in the now-DRC, “tendentious”, and he glosses over many of the European interventions or lack thereof, clearly uncomfortable apportioning blame. For an overview, though, it’s very informative. I plan to read Blood River and King Leopold’s Ghost as soon as I can, to get a more nuanced (and hopefully less “official”) picture.

up next: The Moon and Sixpence (I’ve been saying this for months) for the Classics Club, and Deep Lane, a new poetry collection by Mark Doty, to review in Quadrapheme. It has the most elegant cover I’ve seen for a long time, even with fuzzy resolution: