Where I read it: sitting under a thick-canopied tree in Kensington Gardens, waiting out the rain

The Siege of Krishnapur is the first in a series of three books that J.G. Farrell wrote, loosely bound by the theme of the end of the British Empire. (His second, Troubles, is set in Ireland, while the third, The Singapore Grip, is–unsurprisingly–set in Singapore.) It’s set in 1857 (though written in 1973) and takes as its premise the Indian Rebellion of that year, which until recently was still taught in schools as “the Sepoy Mutiny”. It won the Booker Prize the year it was published, and it serves as a fantastic reminder of the practicalities of siege: diminishing food, increased prices, hysteria, the growing issue of sanitation and health. One of the subplots concerns a feud between the cantonment’s two British doctors on how to treat cholera. The one whom most people seem to trust is, perhaps also unsurprisingly, wrong; the fact that so many frightened citizens adhere to his ideas says a lot about group psychology, another of this novel’s preoccupations.

So it is in many ways a sincere and realistic book; what no one seems to say about it, though, is that it’s also a satire of nearly absurdist proportions. The scene in which one of our protagonists, an official primarily known as the Collector, sits calmly through a barrage of musket fire, drinking his tea, while other soldiers drop below the table, reminded me of nothing so strongly as the battle scene from Carry On Up the Khyber. (You know, the one where the English dinner party keeps on tidily using its fish forks as plaster from the ceiling rains down upon them.)  In the Carry On scene, the cheery demeanour of the characters borders on the psychotic, something the audience is allowed to realize because one of the characters is having the “appropriate” reaction (terror). In Siege, the calmness is also psychotic, but the narrating voice remains blandly oblivious to it, which is doubly terrifying.

Scott Esposito, an American book blogger and critic, wrote about this in 2008, pointing out how the Collector observes with detached interest that his hand is shaking too hard to put the sugar in his tea: “He’s trying to be dignified and British”, Esposito writes, “but he’s also resigned to the fact that he’s not quite pulling it off.” Yes, exactly, but there’s something amazingly nihilistic about that. It’s interesting that mainstream criticism about The Siege of Krishnapur doesn’t appear to talk about it. (For similar reasons, the book also reminded me, in parts, of Catch-22, another novel about how violent conflict brings out the emotional hypocrisy of humans, makes our attempts to be brave seem pathetic.)

The reason this sneaks up on you—this darkly comical flavour—is because the book itself is written in a style that really could not be called anything but “conservative realism”. It looks like a good old-fashioned un-self-conscious novel, with heroes and heroines and bonnets and a linear plot. There’s nothing particularly self-aggrandizing about the narrating voice. It’s not doing cartwheels in front of you. It doesn’t taste postmodern at first; it barely even tastes regular modern. Farrell’s sentences, with their long meandering rhythm, could have been lifted from the 1857 about which he writes, although they’re not pastiche or parody: another instance of how this book presents itself as a very sincere piece of storytelling.

I won’t deny that it’s hard to get into this book; the prose is oddly dense for such a thin volume, and initially, very little happens. By the halfway point, though, you’re completely invested in the incremental destruction of the certainties these characters have held dear–certainties about the rightness of their God, their country, their use of science, the value of progress. It’s worth reading for that alone: how necessary Farrell makes it for the reader to confront her own certainties as she reads, to admit that she might be wrong.

The end of October means the approach of Halloween, which means that in the book-reading corner of the Internet, everyone is sharing their favorite creepy reads. In this as in most other areas of Western culture, white dudes comprise a disproportionate part of the feted canon. It’s not that writers like Poe, Lovecraft, Stephen King and Wilkie Collins (to name but a few) aren’t good; they absolutely are. But the problem is that any fool can find them. Making a list with these guys on it isn’t exactly hard. It’s not like people of colour have never written ghost stories, so why don’t they get onto lists? Herewith, nine of the creepiest, most supernatural books by black American, black African, South American and Native American writers. I’ve tried to stick with ones that I’ve read, or at least ones by authors whose other work I’ve read, but I’d love any additional recommendations, particularly by Asian authors…

Beloved, by Toni Morrison. Obviously. A baby murdered by her mother to save her from a life of slavery haunts the family that she never knew. A classic, and skin-crawlingly scary to boot: it’s not so much the supernatural elements, more the knowledge that the horrors of slavery that Morrison’s heroine Sethe lives through were real.

The Famished Road, by Ben Okri. Set in colonial Nigeria, this novel won the 1991 Booker Prize and is the story of a “spirit-child”, Azaro, who tries to break a promise to the spirit world. The way that our physical reality slips and slides into a metaphysical reality is where Okri derives the creepiness.

The Icarus Girl, by Helen Oyeyemi. In a similar vein, The Icarus Girl is about a little girl, Jessamy, from a biracial family, who discovers that her new best friend, TillyTilly, might be more than imaginary, and less than well-meaning. As a writer, Oyeyemi’s interest in the sinister potential of tradition and folk tale to shape our lives has continued to develop–her most recent novel, Boy Snow Bird, transplants that interest to New England.

Fledgling, by Octavia Butler. It is about a young black amnesiac female vampire, I don’t know what else you can possibly want. (Oh: polyamory. There’s also polyamory.)

Tell My Horse, by Zora Neale Hurston. Hurston lived in Haiti and participated in voodoo ceremonies there, which she wrote about in this book. Atmospheric, accurate, and utterly without voyeurism—Hurston wasn’t just observing, but taking part—it’s dark and fascinating.

The Palm-Wine Drinkard, by Amos Tutuola. I’m not sure why Gabriel Garcia Marquez has such a monopoly on “magical realism”, because the African writers on this list are chock-full of it. Tutuola’s novella draws on Yoruba folk legend to tell the story of an alcoholic trawling the realms of the dead for his long-lost bartender, and meeting some rather horrible people along the way.

The House of the Spirits, by Isabel Allende. An epic of a witchy family in Latin America over three generations; like One Hundred Years of Solitude, but without the passivity of the inhabitants of Macondo, and with more interesting women.

Reservation Blues, by Sherman Alexie. The story of Robert Johnson, supposedly the world’s greatest blues guitarist, who was said to have sold his soul to the devil in exchange for the ability to play, drives this haunting, heartbreaking novel about a group of guys (and two girls) from a Native American reservation who decide to form a rock band. You could call this magical realism too: Johnson and Big Mom, the local medicine woman/facet of Godhead, slide in and out of the story, although our protagonists are mostly pretty firmly planted in the real world. (Read this even if you’re not interested in a creepy/magical/supernatural Halloween-y type experience. It’s an exceptional book.) 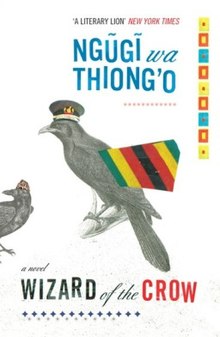 Wizard of the Crow, by Ngugi wa Thiong’o. A Kafkaesque black comedy about a man who claims, out of exasperation with his neighbors, to be a wizard, only to find that he’s threatened the supremacy of his homeland’s tinpot dictator. The weird, shifting realities in this book mirror the horrors of Beloved: this stuff is scary not because it’s supernatural, but because it actually, unbelievably, happens.

I’m moving to London (at last!) on Saturday, and packing all this week, so I may not see you back here before end-of-the-month superlatives. If not, I hope you have a safe and hyperglycemic Halloween.